LINE User Numbers Reach 75 Million Worldwide!
No.1 at many App Stores thanks to Huge Growth in Spain and South America
Our user numbers have reached the 75 million* mark as of today (16 November).
*totals for iPhone, Android, Windows Phone, BlackBerry and feature-phone users combined.

Also, in these last few weeks we have had a huge surge in user numbers from both Spain and South American regions, leading to LINE claiming the number 1 spot in both the Free Apps and Social Networking categories at App Stores in many countries.

LINE has received much positive attention from both Spanish media and famous bloggers. Whether it’s the free messaging, the free calls, the convenience of the PC version, or the stickers, LINE continues to be highly rated as a stable, all-in-one app with easy to use features. LINE camera and other LINE related apps have also been praised for being super-fun.

Breaking through all the language and cultural barriers!
LINE is currently used in over 230 countries. This made-in-Japan service is popular in other areas too: in South-East Asian regions such as Taiwan, and Thailand, Middle-Eastern regions, Russia, and of course Spain and South America. 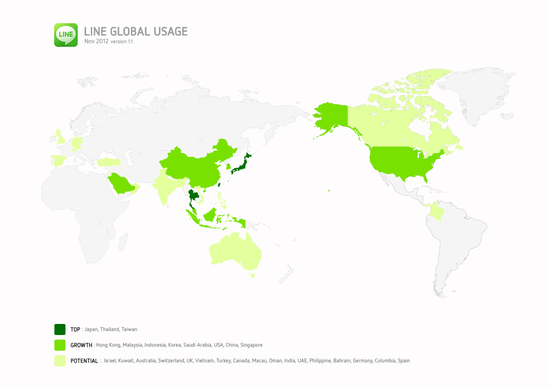 So what next? We will continue to learn and improve our services so that you can have more fun with LINE! Whether you’re in Spanish speaking regions or English speaking areas, we will always be there to bring more life into your smartphone communications.