The latest addition to the LINE GAME series, LINE Fly! ANIMAL, just hit the flight deck. In this thrilling new spin on the old-school shoot ’em up, players control their animal of choice and fly in any of 8 directions while competing for the longest flight, and blowing up plenty of blocks along the way.

Read more
LINE Nutlings Tournament is the latest addition to the LINE GAME series. This trick-based action title centers on a trio of acorn-loving, mischievous creatures known as “Nutlings,” who pile into a makeshift cart and race through a variety of stages while popping wheelies and doing backflips.

We announced that the number of users in India has reached an impressive 10 million. We are aiming to become the No. 1 smartphone communication app in India, and are shoring up our plans for further marketing development.
Anticipating the continuing growth of the smartphone market in India, popular Bollywood Actress Katrina Kaif has been brought in as a brand ambassador, and a TV commercial campaign will be launched on October 11, coinciding with the Diwali festival. In a global first for the company, we will be releasing free India-exclusive stickers featuring photographs of Katrina Kaif. 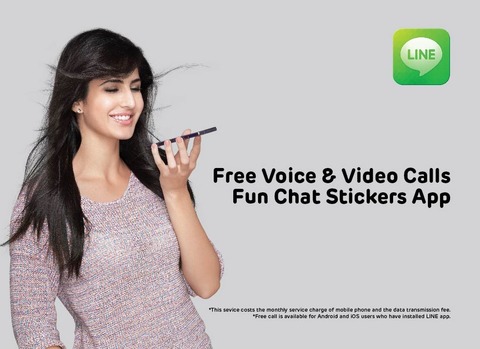 Thank you for using LINE.
LINE is continually providing more convenient and stable features to our users, and we recommend that our customers using older versions of LINE on both the Android and iOS platforms update to the newest version whenever possible.
On October 29, 2013, users of older versions of LINE will be affected by a mandatory version update. Please see below for details.