AppAnnie, a major app market analyst firm, has released its rankings for 2015. Following its performance in 2013 and 2014, LINE Corporation continues to top the charts as the highest earning publisher* across iOS and Google Play platforms.
Additionally, in the worldwide iOS and Android rankings for total revenue*, the LINE app occupied second place, with the electronic comic book service LINE Manga taking sixth place and avatar communication service LINE PLAY capturing seventh place. LINE Corporation was the only company to keep multiple apps in the top 10 rankings from one year to the next.
*Excluding games
Top Companies of 2015:Worldwide Combined iOS and Google Play Revenue Outside of Games 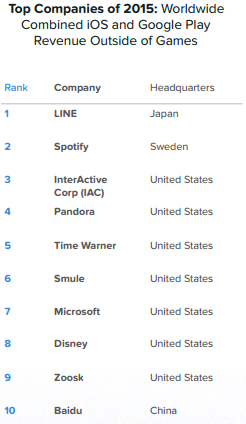 LINE also ranked seventh place in the world's highest earning publisher rankings where games publishers were also included.
We feel deeply honored to see LINE so highly regarded by our global audience. We promise to keep coming up with new and innovative ways to provide the best service possible for all of our beloved users out there. Thanks for your continued support!